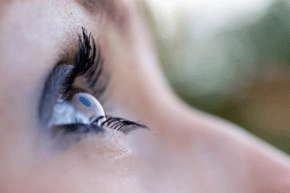 The name LASIK is an acronym for laser-assisted in situ keratomileusis. Let’s break down the meaning of this big name. The word laser is also an acronym. It means light amplification by stimulated emission of radiation. In situ is a Latin term meaning in its original position or place; kerato is a Greek-derived prefix meaning cornea; and mileusis means to shape.  In order to have clear, crisp vision, the eye’s cornea and lens must refract (bend) light rays properly. This allows images to be focused on the retina. Otherwise, the images will be blurry. This blurriness is referred to as a refractive error and it is caused by a difference between the shape of the cornea (curvature) and the length of the eye. LASIK is used to correct the refractive errors of myopia, hyperopia and astigmatism. The LASIK procedure is performed by an ophthalmologist who uses an excimer laser (an ultraviolet laser) to remove a thin layer of corneal tissue, reshaping the cornea so that light rays are focused clearly on the retina.

LASIK surgery in San Clemente is performed by your surgeon, who first creates a corneal flap. The flap is then peeled back so that the excimer laser can reshape the corneal tissue underneath. The hinge of the flap prevents it from being separated from the cornea. Once the reshaping is complete, your surgeon replaces and secures the flap and healing begins. The cornea naturally holds the flap in place so that no stitches are needed. Most patients will notice clearer vision right away.

LASIK is an outpatient procedure and usually only takes 10 to 15 minutes to complete each eye. LASIK is sometimes referred to as laser eye surgery or laser vision correction and is currently the most popular form of refractive surgery in the United States. For most patients, LASIK provides a permanent alternative to eyeglasses or contact lenses.

If you would like more information about the meaning of LASIK, contact Harvard Eye Associates at 949-951-2020 or harvardeye.com to schedule a consultation.