How is Laser Eye Surgery Performed? 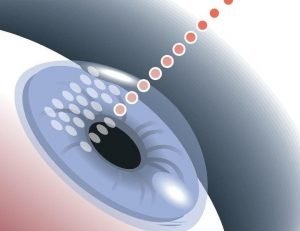 LASIK laser eye surgery is a vision correction procedure that aims at permanently altering the focusing power of the eye by reshaping the cornea with a precise excimer laser.

Laser eye surgery is performed as an outpatient procedure while the patient is awake. Usually both eyes are operated on at the same time, but if you prefer, it can be done one eye at a time.

LASIK is performed in the following steps:

Eye Preparation – A few minutes prior to your LASIK procedure in Laguna Hills, anesthetic eye drops will be placed in the eye to be treated. A special solution is used to clean around the eyes. A speculum (eyelid holder) is placed between your eyelids to keep your eyelids wide open and prevent you from blinking during the procedure.

Flap Creation – To create the corneal flap, your doctor uses either a handheld device or a laser to cut the top layers of corneal tissue at a pre-determined depth. One edge of the flap is left uncut, forming a hinge. Using the hinge, your doctor folds back the flap to access the underlying corneal tissue.

Excimer Laser Ablation – The creation of the corneal flap prepares your eye for the primary step of the LASIK procedure, where the excimer laser is used to correct your vision. The laser beam will be focused over your eye and you will be asked to stare at a blinking light. This light will help you to fixate your eyes on one spot once the laser is started. In a series of short pulses, the excimer laser will reshape your cornea by removing some tissue from the middle layer of the cornea called the stroma. A computer controls the amount of laser energy delivered to your eye according to amount of treatment required. A tracking device is used to find the center of your pupil, so if your eye moves, the laser will follow and stay with the center.

Flap Replacement – After reshaping the corneal tissue, your doctor returns the flap to its original position, where it heals naturally. This step marks the completion of the LASIK procedure.